Order today
for delivery on Tuesday

Everything about the Samsung Galaxy Z Flip F707B Grey

The Samsung Galaxy Z Flip is already Samsung's second folding smartphone. This means that the screen has a fold, so you can fold it up. You flip the phone open and voilà, you suddenly have a screen twice as big!

With this Z Flip, Samsung has chosen to make the device very compact, so as soon as you unfold it, the device is about the same size as an average Samsung phone. Besides the fact that it is one of the first foldable smartphones, it is also just a very good device!

This Galaxy Z Flip is a so-called 'foldable' phone. The screen folds open like an old-fashioned flip phone, but with a full screen on the inside. You can feel the fold a bit, but it is certainly not an issue!

Besides the fact that you can fold it up, it is also just an incredibly good screen. As soon as you open it you are greeted by a 6.7-inch display with a Full HD resolution, which means it is nice and clear. This makes it ideal for watching a video while on the go.

The hinge takes some getting used to, but fortunately it is incredibly sturdy. So sturdy that you can also put it in an L-shape, which means that suddenly you can do things with your phone that you would never do otherwise. For example, you can use your own phone as a tripod for selfies and it is much easier to make video calls.

Because the Galaxy Flip is foldable, the double camera on the outside of the device functions as a main camera as well as a self-image camera. It takes beautiful photos, even in the dark. Both are 12-megapixel sensors, one of which has a wide-angle lens, ideal for selfies of several people or photos of large groups or buildings.

Besides that, there is also a selfie camera on the inside of the device. This is incorporated in a handy punch-hole, a small circle at the top of the screen. Here it doesn't stand out and doesn't get in the way, but it works perfectly!

This Galaxy Z Flip is just a high-end phone on the inside. Thanks to the Snapdragon 855+ processor and 8GB RAM, you don't have to worry about glitching images, because it's incredibly powerful. Demanding games are very easy for this Flip and so is doing multiple things at the same time.

Small display on the inside

When your phone is closed, a small display appears on the outside. This functions a bit as an extra screen. You can see the time on it, and you can use it to answer calls or read short notifications. Very useful!

A foldable phone has less space for a battery, but despite that, this Galaxy Z Flip still has a 3300mAh battery. This is divided between the two parts of the phone and it ensures that you can at least go a whole day with your battery. 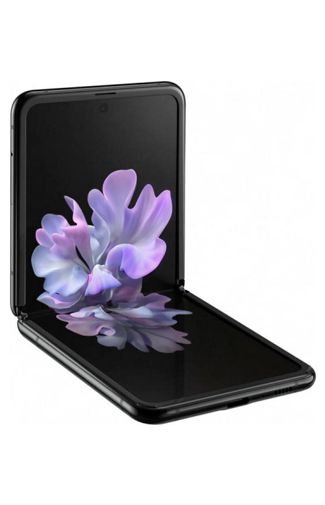