Order today
for delivery on Tuesday

In February 2020, the Samsung Galaxy S20 series was presented and the S20+ 4G was placed between the S20 and S20 Ultra in terms of specifications and price. Next to this 4G variant, there is also a 5G variant. The Galaxy S20+ has been released in the colours Cosmic Black, Cosmic Grey, and Cloud Blue.

This Samsung phone has powerful, fast hardware. For example, it is powered by a Samsung Exynos 990 processor and has 8GB RAM and 128GB of storage space. Four cameras are placed on the back of the device. Besides that, there is a 6.7-inch AMOLED display with a built-in fingerprint scanner.

If you like to take pictures with your phone, the Galaxy S20+ is the perfect phone for you. At the back, there are four cameras with which you can take the most beautiful photos. There's an ultra-wide-angle lens, for example, which allows you to capture large landscapes or groups in one shot.

The camera also has a telephoto lens that allows you to zoom up to five times optically, without loss of quality. You can also take beautiful portraits with a depth-of-field effect. This blurs the background, while the subject of your photo remains sharp.

The Galaxy S20+ 4G has Samsung's own Exynos 990 processor and 8GB RAM. This allows you to effortlessly use demanding apps and games or switch between different apps without any glitches. Besides that, there is 128GB of storage space that you can expand with a microSD card.

You don't have to worry about running out of battery power, because the battery of the S20+ has a large capacity of 4500mAh. And thanks to the quick charge function, the battery is charged in no time. The Samsung smartphone also supports wireless charging.

The Samsung Galaxy S20+ has a glass casing, giving the phone a luxurious appearance. Besides that, the front looks sleek thanks to the rounded bezels. The phone has been released in the colours blue (Cloud Blue), black (Cosmic Black), and grey (Cosmic Grey).

The user manual is not included but can be downloaded or viewed here: Dutch user manual. You can also download an English version: English user manual. 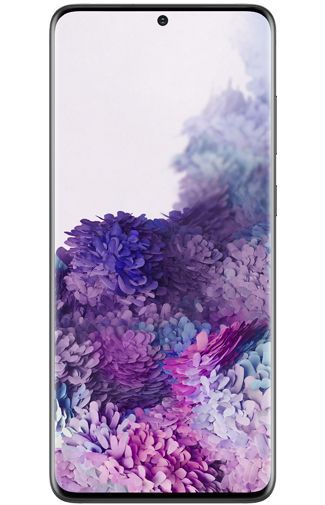