Order before 19:00
for delivery the day after tomorrow

Everything about the Samsung Galaxy A71

Experts about the Samsung Galaxy A71

Average scores of the Samsung Galaxy A71:

Description of the Samsung Galaxy A71

The Samsung Galaxy A71 is a beautiful smartphone in Samsung's A series. This successor to the A70 features a beautiful, large, and sharp screen of 6.7 inch with only a small hole at the top for the front camera. The device is available in the pastel colours black, pink, and silver.

The Galaxy A71 is fitted with four cameras on the back, each with their own function to take beautiful photos in any situation. There's a fingerprint scanner under the display, the processor is powerful and efficient, and you can last long on a single battery charge.

The display of the Galaxy A71 looks stunning. It has a size of 6.7 inch and has a small hole that houses the front camera. Thanks to the super AMOLED technology, the picture shows rich colour rendering and black looks truly black.

This Samsung smartphone comes equipped with five cameras: a 32-megapixel camera on the front and four more lenses on the back. The main camera shoots photos of 64 megapixels that still look good in lower lighting. The other three cameras each have their own function.

You can add a depth-of-field effect with the depth sensor, which blurs the background. You can capture small objects with the macro lens, and the wide-angle lens lets you capture a wider image. You can use image stabilisation while filming.

Lots of computing power for everyday use

If you don't want to use your device to play the heaviest 3D games, but do want a device that can do everything else, the A71 is a good option. The processor is not only energy-efficient, but also perfectly capable of handling everyday tasks. Multitasking is a breeze and you can play lighter games without any problems.

The A71 has a battery of 4500mAh. Thanks to this battery, you smartphone will easily last an entire day on a single battery charge, even with intensive use. Charging is done in no time. The included charger has a capacity of 25W, which makes fast charging possible.

Fingerprint scanner under the screen

You can use the fingerprint scanner to unlock your Galaxy A71 quickly. It is built under the display, so you won't even have to pick up the phone to use it. It's not only super fast, but also very secure!

If you like to store many photos, apps, and films on your phone, the Samsung Galaxy A71 has got you covered. This phone has 128GB of internal storage. You can even expand that with a microSD card, so you'll never run out of space!

Android 10 with a Samsung coat

Out of the box, the A71 runs on Android 10. This is the operating system from Google, but Samsung has added their own skin to the software: One UI. This adds extra features and pre-installed apps to the smartphone.

Tips & Tricks for the Samsung Galaxy A71

Buy the Samsung Galaxy A71? The options:

Accessories for the Samsung Galaxy A71

Show all accessories for the Samsung Galaxy A71

Accessories that go with the Samsung Galaxy A71 Show all accessories for the Samsung Galaxy A71

Colour & GB options for the Samsung Galaxy A71

Outlet models of the Samsung Galaxy A71 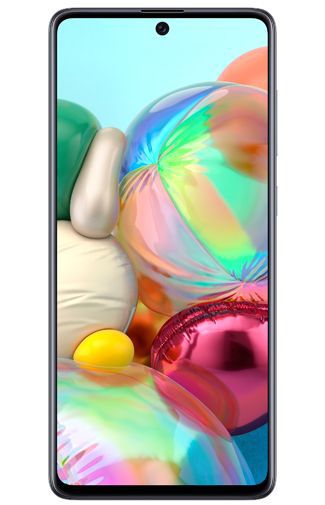