All our tablets are SIM-lock free and compatible with all providers.

Order before 19:00
for next-day delivery

Everything about the Apple iPad Mini 2021 WiFi 64GB Black

Apple announced this updated variant of the iPad Mini on September 14, 2021. This iPad Mini 2021 has a fresh design that matches the look of the iPhone 13 series. The new design means, among other things, that the screen is much larger but the dimensions are smaller!

Just like its big brother, this iPad Mini is powered by Apple's own A15 chip which makes it extremely fast. A new feature of the iPad Mini 2021 is the fingerprint scanner on the top which allows for easy unlocking and payment. Finally, the camera has been improved as well.

This generation of the iPad Mini is even more compact than its predecessor, but the screen has become larger. So you have smaller edges and can enjoy images on a bigger screen! The screen has the usual high resolution.

The front camera of the iPad Mini 2021 has a 12MP sensor with a wide viewing angle. The smart software makes sure that you are always properly in the picture during video calls or videos. When more people are in the frame, the image adjusts automatically!

Use with Apple Pencil

Apple has given this iPad Mini 2021 support for the Apple Pencil. This useful accessory by Apple expands the possibilities enormously and allows you to use this iPad as a sketchbook, notebook or to draw very precise designs. Simply snap the Pencil to the side of the device magnetically.

The iPad Mini no longer has a home button, but Apple has brought the fingerprint scanner to this new generation. It is placed on the top so you can always reach it easily. TouchID is a secure way to unlock your iPad Mini, or pay with your iPad!

Apple always makes sure their devices have powerful chips so you can run all the apps and games without a hitch. Apple's A15 chip is the most powerful chip on the market at the time of release and this makes for super-fast performance.

Connect all kinds of devices via the USB-C port

Instead of Apple's own Lightning connector, the iPad Mini 2021 uses the more universal USB-C port. This port not only allows you to charge your iPad Mini quickly, but also to connect a range of devices such as a keyboard or mixing console!

All our tablets are SIM-lock free and compatible with all providers. 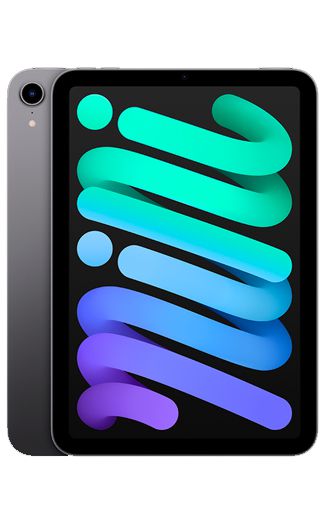